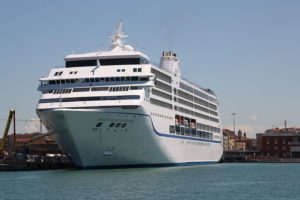 Accompanied by her husband and Monaco’s reigning monarch, Prince Albert II, the tiny Princess of Monaco and former Olympic swimmer, Charlene, 38, was wearing a full-length silver dress. The princess cut a red velvet ribbon and blew a kiss before smashing a bottle of Veuve Clicquot champagne against the hull of Seven Seas Explorer.

The ceremony took place before more than 700 attendees: Regent’s top executives, travel agents, journalists, employees, crew members and past passengers. The guests had taken seats in front of a stage alongside the vessel, billed as the most luxurious cruise ship ever. The two-hour event was hosted by Entertainment Tonight’s Kevin Frazier.

The christening was followed by a 45-minute performance of Italian tenor Andrea Bocelli, including La Donna e Mobile from Verdi’s opera Rigoletto, Time to Say Goodbye and the 1950s Dean Martin song Volare. Bocelli finished his concert with Nessun Dorma, the well-known aria from Turandot, eliciting a cheering roar from the audience.

Explorer is the fourth addition to the Regent’s fleet and the cruise line’s first new ship in more than a decade. At $450 million, the 750-passenger ship has 14 decks and boasts some of the most spacious and luxurious accommodations at sea and a remarkable guest-to-crew ratio of 1:1.38.

All of the 375 suites have real marble bathrooms, crystal chandeliers and oversized balconies. The pinnacle is the two-bedroom, 4,433-square-foot Regent Suite, overlooking the bow of the ship.  The suite comes with a private spa with sauna, an oversized, ocean-view hot tub, as well as a limousine and driver at the port.

Explorer  will depart on its maiden voyage on July 20 and spend its inaugural season in Europe with a range of 8 to 14-night Mediterranean itineraries starting at $6,799 per person. Then, it will reposition to PortMiami for a series of Caribbean sailings starting in early December.