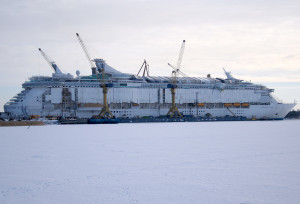 Harmony of the Seas, Royal Caribbean’s third Oasis class cruise ship, will be the first in the fleet to offer the Splashaway Bay, an interactive aqua park for kids, the Miami-based cruise line said in a press release.

The new 5,497- passenger Harmony of the Seas is scheduled to debut in May 2016 in Europe with a series of seven-day western Mediterranean itineraries. Then the cruise ship will return to its home dock in Fort Lauderdale, Florida.

The ship will boast the tallest water slide at sea, known as The Perfect Storm that will feature 100-foot dramatic plunge, called The Ultimate Abyss, and a trio of smaller waterslides, Cyclone, Typhoon and Supercell, and a splash pad for kids.

The water park, dubbed Splashaway Bay, will feature sea creature water cannons, winding slides, a multiplatform jungle gym and a huge bucket that will dump water onto sun-seekers below.

The Ultimate Abyss, the 10-story thrill slide, will begin in the pool and sports zone spiraling down to the boardwalk neighborhood below.

At 227,000 gross registered tons, Harmony of the Seas will feature 2,747 cabins and span 16 decks. Similar to its sisters, Oasis of the Seas and Allure of the Seas, Harmony will include seven neighborhoods such as Central Park, Boardwalk and the Royal Promenade, a bar with dancing robot bartenders, virtual balconies in many interior staterooms with sea and port views, as well as a spa and fitness center.