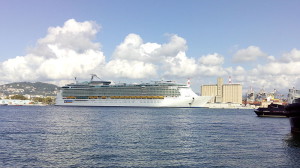 Quantum of the Seas, the first in the new Quantum class, is scheduled to be introduced in November and will have her maiden voyage from Bayonne, New Jersey.  Ordered in early 2011, the ship is currently under construction at the Meyer Werft shipyard in Papenburg, Germany.

Built on a legacy of innovation and creative design, the 1,141-foot long, 16-decked cruise ship will carry 4,180 passengers and will be the first to boast new features such as an observation capsule called the North Star, the first skydiving simulator at sea, bumping cars, the largest indoor sports and entertainment complex at sea, larger more advanced staterooms, virtual balconies providing real-time views of the sea from high-tech walls.

The North Star is a jewel-shaped glass capsule, ascending guests over 300 feet above sea level. They say it was inspired by the London Eye. The North Star can carry up to 13 passengers at a time and offers them breathtaking 360-degree views from birth eye of the ocean, the ship and the port. The 15-minute journey is available at sea as well as in port. The most spectacular and sought-after journeys are expected to be at sunrise and sunset.

After spending six months in the New York market, Quantum at the Seas will set an epic 53-night journey and call Shanghai home port. The ship will set sail on May 2, 2015 from New York on the nearly 2-month journey.

While heading to China the cruise ship will sail via the Atlantic Ocean, the Mediterranean Sea, and then a passage through the Suez Canal to Indian Ocean and Asia. Along the way, Quantum of the Seas will make port-of-call stops at almost 2 dozens ports including Barcelona, Dubai, India, Oman, Malaysia, Singapore and Hong Kong. Built into the 53-night trip, there are five other mini-sailings from three to 16 nights that you can choose from.