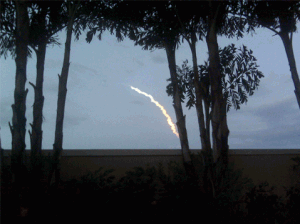 Smoke Trajectory of the Space Ship

The 3rd GPS IIF Satellite is being launched from Cape Canaveral on 4th October
On the 4th of October the rocket Delta IV will be launched from Cape Canaveral Air Force Station near Orlando. It will be carrying a GPS Satellite that will help for the positioning services for the public and the military.
It is scheduled to be launched at 8:10 a.m. on Thursday from the Atlantic Coast of Cape Canaveral. The time from the ignition of the main engine through to the separation of the second stage is scheduled to be over three hours.
The Rocket is the third spacecraft being used as a GPS Satellite and will be replacing the first one and the oldest of them. The GPS Satellites have helped with improving the location capabilities of this kind of technology.
On May 27th 2010 was launched the first GPS IIF Satellite and entered service on August 26th 2010. The second was launched on July 16th 2011 and entered service on August 22th 2011.
There are contracted to be 12 GPS IIF Satellites. Three of these Boeings are ready and stored and the rest six of them are being tested.