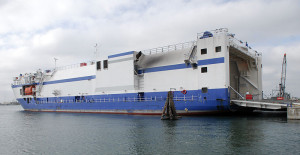 GT USA, an American company which is a subsidiary of Middle Eastern cargo company Gulftainer signed a 35-year agreement with Port Canaveral and agreed to invest $100 million in infrastructure, equipment and human resources. The company expects to hire almost 100% of its full-time employees from Florida.

Badr Jafar, Chairman of Gulftainer’s Executive Board and John E.Walsh, CEO of the Canaveral Port Authority, signed the agreement at a ceremony on June 24.

With a global reputation for highly efficient and productive services, cargo company Gulftainer Group operates and manages ports and logistic businesses in 5 continents worldwide and has a current handling activity of 6 million TEUs (twenty-foot equivalent units) and plans to expand them to 18 million.

When fully operational, the new terminal at Port Canaveral is expected to create about 2,000 direct and indirect jobs including 500 jobs at the port itself.

As one of the busiest ports in the world today, Port Canaveral handles approximately four million tones cargo per year and with the new agreement signed it will contribute more than US$280 million  in revenue to Port Canaveral and about US$630 million to the local economy.