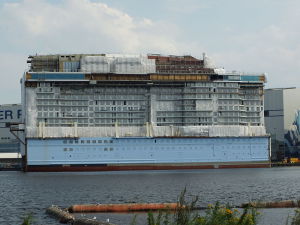 Harmony of the Seas will be the biggest cruise ship ever built and the third in the line’s Oasis class ship, announced Royal Caribbean last Wednesday. The ship which is currently under construction at the STX shipyard in Saint-Nazaire, France, will span 16 decks and it will carry 5,479 passengers, surpassing its sister ships Oasis of the Seas and Allure of the Seas.

The first two Oasis class ships, the Oasis and the Allure, debuted in 2009 and 2010 and they are by far the biggest cruise ships currently at sea. The Harmony will measure 227,000 tons and will have 2,747 staterooms, larger than the cabins in Oasis and Allure in some categories. Like the two previous ships, the vessel will feature seven neighborhoods or activity zones that include Central Park with a real tropical garden open to the air, Boardwalk and the Royal Promenade with its shops and cafes, as well as the Pool and Sports Zone, Vitality at Sea Spa and Fitness Center, Entertainment Place and Youth Zone.

The Harmony of the Seas will boast a deck-top water park which will feature three all-new multi-story waterslides and the guests will twist in a champagne bowl at the end of the ride.

The passengers will also be offered other Quantum innovations, such as robot bartenders in the Bionic Bar that will serve up one-of-a-kind crafted cocktails.

High-tech wristbands opening the stateroom doors and charging expenses will be available aboard too, as well as the fastest internet connection at sea that will allow guests to Skype with family and friends and share their vacation experience on social media.