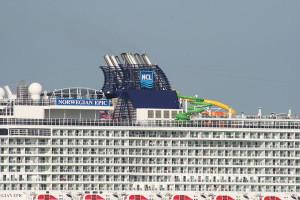 The Norwegian Spirit entered Port Canaveral on Saturday and marked first Norwegian Cruise Line ship based there since 2012.

The 879-foot and 75,338 tons Spirit was constructed for Star Cruises by Meyer-Werft and entered cruise service in 1998 as the SuperStar Leo. When the ship joined the Norwegian fleet in 2004, it was renamed Norwegian Spirit and in 2008 it had a refurbishment. The 1,996-guest vessel is the only ship of its class in the Norwegian fleet. The Spirit was based in Barcelona and left Europe on November 5th, 2015. After a 16-day trans-Atlantic cruise to Florida visiting Madeira, Antigua, St. Kitts, St. Maarten and St. Thomas, the 962-crew ship arrived at 6 a.m. Saturday at Port Canaveral’s Cruise Terminal 1. CEO John Walsh said there were about 1,890 passengers on that cruise.

Norwegian announced a few months ago that the much-larger Norwegian Epic would replace her sister the Spirit at Port Canaveral, starting in November 2016. The Norwegian Epic was built in 2010 and has a double-occupancy capacity of 4,100 and a crew of 1,753. The Epic will offer seven-day Eastern and Western Caribbean itineraries, as well as three- and four-day cruises to the Bahamas.

The Norwegian Epic will join the 5,400-passenger Oasis of the Sea that is also set to debut at Port Canaveral in 2016. The two cruise ships would be the biggest at Port Canaveral and would berth alongside Carnival Magic, Carnival Sunshine, Disney Dream and Disney Fantasy.