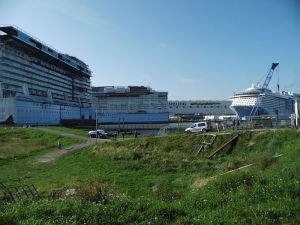 Royal Caribbean Cruises Ltd. has announced that it has entered into an agreement with Meyer Werft shipyard in Papenburg, Germany to order a fifth Quantum-class ship, to be delivered in the fall of 2020. The announcement came on Tuesday, a day before the line’s second Quantum-class ship, Anthem of the Seas, arrived in its permanent homeport of Bayonne, New Jersey, after sailing a short season out of the U.K. Only ten days earlier, an official keel-laying ceremony for the fourth Oasis class ship was held in the STX Shipyard in St. Nazaire, France. Besides, the christening of Ovation of the Seas and Harmony of the Seas is scheduled for the next spring.

Quantum-class ships such as next year’s Ovation and Harmony have RipCord by iFly, a skydiving simulator; high-speed Internet; the North Star, a jewel-shaped glass capsule that rises 300 feet above sea level and provides 360-degree breathtaking views from high above the ship; robotic bartenders in Bionic Bar; the dancing Roboscreens in the unique three-deck-high Two70 lounge and theater; and the Seaplex- the largest sports and entertainment complex with bumper cars, roller skating and a circus school, as well as staterooms featuring virtual balconies with real-time ocean views. As highlights of Oasis-class ships such as Harmony are 10-storey high water slides, a zip wire, rock climbing and an ice rink.

Quantum of the Seas is the first ship in the class, launched in 2014 and currently sailing year-round in Asia. The third ship, Ovation of the Seas, scheduled to launch in 2016,is being designed with the Chinese market in mind and also will sail permanently in Asia.

Royal Caribbean has not provided further information on where the fourth ship, which will launch in 2019, and the newly announced fifth Quantum-class ship will be deployed.