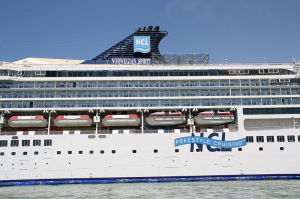 Details about the unique offerings coming aboard the new Norwegian Escape have been slowly released.

The cruise ship, which is currently under construction at the Meyer Werft shipyard in Germany, will feature its first ever room full of snow. Dubbed Snow Room, the new feature is part of the Mandara Spa’s Thermal Suite, which Norwegian Cruise Line is billing as the largest at sea.

The arctic oasis, Snow Room, will range in temperature from 21 to 32 degrees Fahrenheit and will send out a flurry of powdery snow several times a day, the company announced in a press release. Norwegian is no stranger to freezing onboard temperatures, as a few of its ships boast an ice bar. The Miami-based company touts the Snow Room’s health advantages include stimulating blood circulation and strengthening the immune system.

The Mandara Spa will span two decks, with ocean views and its Thermal Suite will have 17 heated loungers, a salt room that’s meant to soothe respiratory systems, a hydro-therapy pool, whirlpools, a steam room, a dry sauna and many other relaxation and treatment areas with more than 50 signature services for both men and women, among them the adults-only Vibe Beach Club and Spice H20 spaces. Spice H20 will have a grotto with waterfalls that’s unique to the Escape, as well as sun loungers, a video screen and hot tubs. At night, the Spice H20 transforms into a dance space.

The newest Norwegian cruise ship will house the largest water park at sea with four multi-story water slides, as well as the biggest-ever ropes course at sea, three-story elevated, a miniature golf course, a full-size basketball court and a bocce ball court, first for the line.

The Escape will join the Norwegian fleet in November 2015, starting weekly seven-day cruises to the Eastern Caribbean from Miami.