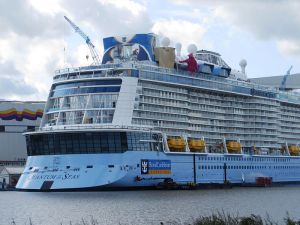 The world’s newest cruise ship has had its first taste of water. Royal Caribbean’s Anthem of the Seas left dry dock at Meyer Werft shipyards in Papenberg, Germany only two weeks ago. The Anthem of the Seas took the 20-mile trip up the River Ems from Meyer Werft shipyards to Eemshaven and the North Sea where it began sea trials. The trip lasted 10 hours and brought out thousands of spectators while the massive vessel was travelling in reverse with the aid of two tugboats at about 2-3 knotts.

The Anthem of the Seas has been under construction since August and its naming ceremony is planned for April 20 then it begins service from Southampton for a summer of Mediterranean cruises. In the fall, it will make its debut in North America and it will take over the New York market from Cape Liberty in Bayonne, N.J in place of the Quantum of the Seas, which is heading to China for 3- to 5- night cruises in May. Several of Anthem’s itineraries will include port of call stops at Port Canaveral.

The Anthem of the Seas won’t be as large as Royal Caribbean two Oasis class vessels, Oasis of the Seas and her sister Allure of the Seas that currently are the world’s largest cruise ships.

However, it will rank among the five biggest cruise ships afloat. The ship will boast all of the signature Royal Caribbean innovative features, such as the North Star, a glass capsule on a mechanical arm that will rise 300 feet above the ocean for bird’s-eye views, FlowRider surf simulator, a 30-foot-high rock climbing wall, H20 Zone kids water park, a sky diving simulator, the Bionic Bar featuring robotic bartenders, Virtual Balcony staterooms with real-time views of the ocean projected on LED screens into the rooms, the Seaplex, an indoor activity center featuring a full-size basketball court, nighttime bumper cars and roller skating.