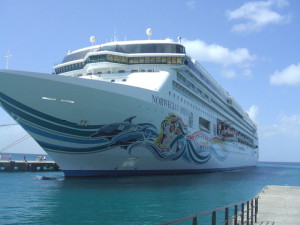 Port Canaveral will host Norwegian Cruise Line again and prepares for the arrival of the Norwegian Spirit. A 879-foot, 75,338 tons and 1,996-guest ship, the Spirit was constructed for Star Cruises by Meyer-Werft and launched in 1998. She was bought by Norwegian Cruise Line in 2004 and renamed Norwegian Spirit. It’s the only ship of its class in the Norwegian fleet. The ship is presently based in Barcelona and will leave Europe on November 5th, 2015 on a 16-day cruise to Florida visiting Madeira, Antigua, St. Kitts, St. Maarten and St. Thomas.

An agreement was signed to bring Norwegian Cruise Line back to Port Canaveral and keep the New York-based vessels returning to the port in the next three years, the port’s authority announced. Port Canaveral will be home port of a Norwegian for the first time since the winter of 2011-12 when it was home for the Norwegian Sun.

Port Canaveral has presently seven terminals. An eighth terminal is under construction and it is scheduled to open in November. There are plans to build a ninth in 2016 and tenth by 2019 with the aim of increasing the port’s growth to 8 million travelers by the middle of 2020s and the port’s cruise passenger traffic is expected to be up to 50 per cent, according to the latest port releases. The port’s goal is to increase the number of home port ships to 11 and port calls up to 200 by 2016 and to become the world’s busiest cruise port.